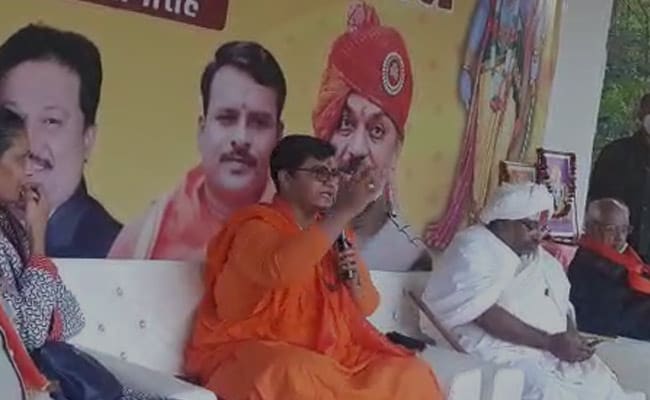 The Madhya Pradesh government has come under the scanner due to the controversial statement of BJP MP Pragya Singh Thakur (File photo).

The Shivraj Singh Chouhan government of Madhya Pradesh has come in the dock due to the statement of Bhopal MP and BJP leader Pragya Singh Thakur. Pragya Singh told the stage that poor people in their adopted villages sell their daughters and give money to the police. This matter is of September 17, when Pragya said in the program of Udyog Vyapar Mandal that she has adopted three villages. She helps the poor girls of these villages in their studies. Some material has also been given to them by the Mandal.

Pragya Singh Thakur said that people in those villages are poor. They make and sell raw liquor. In such a situation, when the police take them away, they sell their girls and give money to the police and rescue their people.


Congress is attacking on this statement of Bhopal MP. Congress spokesperson and member of the State Women’s Commission Sangeeta Sharma said, it is the misfortune of Madhya Pradesh that a MP Pragya Singh Thakur gives a statement, tells what is the condition of the three settlements. They make and sell raw liquor, when the police catch them, they sell their daughters and then rescue them from the police. This is very sad and condemnable.

Sangeeta Sharma said that, for 18 years, there is a Shivraj Singh government which makes tall claims of ‘Beti Padhao, Beti Bachao’, and in a capital like Bhopal, these are the conditions… which the MP is making statements herself. This clearly proves that the lofty claims being made in Madhya Pradesh are false. I demand from the Chief Minister that if such illegal business is being done, then I also want to ask Sadhvi Pragya Singh Thakur, to whom these girls are being sold, who are those buyers.


In this matter, Madhya Pradesh Home Minister Dr Narottam Mishra said that Sadhvi ji belongs to our family, belongs to our party. If they have any information in this regard, then tell us, the law will take its course.


By the way, Pragya Thakur has given such statements many times in the last three years, due to which not only the state government but also the central government has come in the dock.

◀ Chhattisgarh: Woman Bitten By Snake Carried On Cot In Deep Water
Lumpy : BJP Protest In Jaipur Over Lumpy Disease That Has Killed Over 50,000 Cattle In Rajasthan ▶