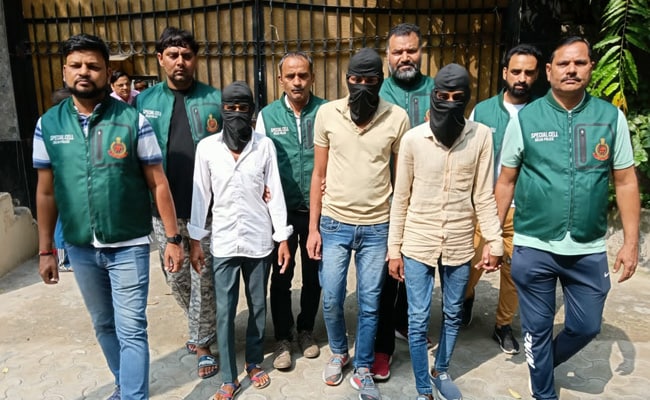 The police were looking for him in 33 criminal cases.

The Special Cell of Delhi Police has arrested three people, including the kingpin of an inter-state gang that robbed ATMs in the national capital. The names of the accused are Mustakim, Samma Khan and Mohammad Haseen. Mustakim is the leader of the gang. The police were looking for him in 33 criminal cases. This accused is involved in 25 cases of ATM cutting. Mustaqeem was on the run for the last three years. He was also declared a fugitive in eight cases by several courts.

The gang has looted about Rs 2.25 crore by cutting an ATM. Three pistols have been recovered from them. According to DCP Jasmeet Singh, ACP Atar Singh and the team of Inspector Shiv Kumar and Karamveer have succeeded in catching the three. Mustakim, Samma Khan and Mohammad Haseen are residents of Nuh, Haryana. On September 17, the Special Cell had received information that three members of an ATM robbery gang were about to visit a colleague near Harinagar. Then they were caught by laying a trap.

According to the police, these people used to break the CCTV installed in the ATM, during interrogation of Mustakim it was found that he had gone to rob the ATM in Dibrugarh, Assam in a truck in the first week of September this year. On the night of September 5, he along with his associates robbed two SBI ATMs in Dibrugarh with a gas cutter and robbed Rs 45.60 lakh. The fire was caused by the spark of a gas cutter while cutting the ATM. Due to which the ATM was burnt down.

Within 4 months, members of this gang looted lakhs of rupees by breaking three ATMs in Delhi and one in Maharashtra. On June 16, robbers broke into an ATM of HDFC Bank in Delhi’s Shantiniketan for Rs 20.85 lakh, Central Bank of India ATM in Mitraon on July 20, Rs 6.40 lakh, on May 10 from the ATM of AU Small Financing Bank in Patel Nagar Rs 10 lakh, Rs 8.50 lakh was robbed from the ATM of Index Bank in Maharashtra on 22 July.